I was recently clearing out some old papers from the loft when I came across a newspaper cutting from the early 1980s. Entitled ‘What employers want’ it was a report of speech given by the director of the Manpower Services Commission at an NUT conference. It included a list of what employees wanted from school leavers:

The speaker also called for a new look at the the effect of university entry qualifications on decisions about which courses of study to follow in school ‘that go far beyond traditional academic disciplines‘. He called for subjects to be grouped with clear academic and vocational aims, and that ‘a new approach is required‘ to improve young people’s knowledge of the world of work than is covered in the traditional curricula.

Now, there’s more to education than simply preparing people for the world of work of course, but nonetheless, some thirty years later, we are still pursuing a university-led system in which vocationally-related areas of study are seen to be soft options. And the basic needs of employers are still under-valued in terms of formal assessment, particularly when one now adds in such things as team-work and flexibility. At the same time thousands of school leavers with sound academic A level qualifications are now having to look for employment instead of gaining a place at a university.

But I guess there is one thing that has improved since the early 1980s – now at least, most young people seem to know how to use a phone…

This week I’m going to try very hard not to mention that nice Mr G. But of course it’s just possible I might not succeed.

I want to explore what is actually meant by the use of the term ‘soft-subjects’, which appears frequently in news items about education, and which I continue to find offensive. Presumably the intended, and perceived, implication is that soft subjects are somehow easier to consume and digest, and less demanding and challenging. It makes us think of Mr Softee ice cream, soft-rock, and maybe even soft matter, which apparently has a ‘low resistance to external force’. The phrase is nearly always exemplified as being Media Studies or Sports Management, but never defined or explained. So what are the other soft subjects, and what makes them soft?

According to Cambridge University, ‘soft’ A levels include those such as Health and Social Care, Travel and Tourism, Business Studies, ICT and Design and Technology, Drama, PE, Art, Accounting, Music Technology, Law and Psychology. So the phrase appears to derived from the list of subjects deemed unacceptable for entry to the top academic universities. And, one can’t help observe, subjects that are probably more likely to lead to future employment. Meanwhile the so-called ‘hard’ subjects tend to require the memorising of a large body of knowledge and the systematic study of a range of established and accepted concepts, rather than the development of thinking and learning skills or of any personal development.

All this continues to perpetuate the myth that academic study is difficult while ‘practical’ work is easy. But academic study is relatively easy for those who are academically able, and only challenging for those who are not. And in my time I’ve attempted to teach some academically very able students who have found practical work to be extremely demanding, and the approach to creative, open-ended problem-solving to be both beyond them, and indeed quite intolerable.

As far as I’m concerned, those income-guaranteed academic university professors who spend their time cross-referencing what others have said to produce a often largely incomprehensible paper that hardly anyone else will ever read, and without any of the risk-taking, team-working, delivery deadlines of commercial pressures of the outside world, must be considered to be leading a truly ‘soft’ way of life. It may require some ‘deep thought’, but knowledge and understanding without practical action and effective communication  is of little value.

But of course all Beano readers already know the difference between hard and soft. In my day it was quite clear exactly what a ‘softy’ was. He was called Walter, and appeared each week alongside Dennis the Menace. He is portrayed as a typical “geek”, wearing a blue schoolboy’s shirt and has glasses and slicked-back hair. He does well in school and is adored by his teachers and parents, and his favourite bedtime story is doubtless an encyclopedia.

So who is the biggest softie of them all then? Now who is this a photo of in his younger days….?

And, it seems, Mr G’s favourite book was indeed – an encyclopedia…

‘When he was appointed education secretary in May his proud parents told local journalist Kris Gilmartin in their home town of Aberdeen that their son used to “carry an encyclopaedia home from school with him”. When he finished his schoolwork ahead of other pupils, instead of bunking off or passing notes, he would open the encyclopaedia where he had last left off.’

Another Michael Gove-related post this weekend I’m afraid. Though if you think I’ve got it in for nice Mr Gove, try listening to the ‘Now Show’ on Radio 4, where he is cast as a evil ventriloquist’s dummy.

Anyway, it seems like Mr ‘Gottle O’Geer’ Gove has got his sums wrong again.

You’d think that Cambridge University, one half, or 50%, of the holy grail of academia, would be delighted by the prospect of a return to more rigorous Maths A levels, but instead their admissions manager has said that “AS-levels were an “invaluable indicator of progress”, and that “the exams helped universities choose the best students and had widened participation by giving bright students from less privileged backgrounds the confidence to apply for top universities”. At the same time, the chair of ACME* warns that.. ‘making A-level maths harder could result in a drop in the number of students taking the subject’ and ‘would again see university mathematics departments closing as a result’. (*ACME stands for the ‘Advisory Committee on Mathematics Education’. I wonder if there is a similar body for Numeracy Education?)

But of most interest is Mr Gove’s desire to scrap modular A levels in order to ‘revive the art of deep thought‘. Now of course as everyone else knows, Deep Thought is a computer that was created by the pan-dimensional, hyper-intelligent race of beings (whose three dimensional protrusions into our universe are ordinary white mice) to come up with the Answer to The Ultimate Question of Life, the Universe, and Everything, which of course is 42, and suggests that the real problem was that ‘you’ve never actually known what the question was‘. So now it turns out that perhaps Mr Gove sees himself as a hyper-intelligent white mouse spending tax-payers money on another poorly specified IT project doomed to failure?

Even more unfortunately for him though, it turns out that in a radio interview, Douglas Adams once explained that the name of ‘Deep Thought’ was in fact a joke based on the title of a 1972 pornographic movie, entitled ‘Deep Throat’. So it seems we have Mr Gove to thank for his hidden desire to revive the ‘art of deep throat’…. quite unsuitable for students under the age of 18 though. 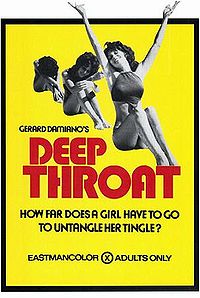