All Change Please! – the blog that broke the news that the Government was being secretly run by International Rescue (Thunderbirds are Gove), can now reveal that, with the announcement today of the double-dip entendre recession, Thunderbirds have been sacked and the Cabinet has now been taken over by the cast of the Carry On films…

Prime Minister David ‘Infamy, infamy, they’ve all got it infamy’ Cameron is in fact now none other than Kenneth Williams.

While Michael ‘Ooh Matron’ Gove is being expertly played by Charles Hawtrey, straight (or otherwise) from the 1950s.

Here’s Kenneth  “A woman walks into a bar and asks for a double entendre, so the barman gives her one.” Clarke is played by Sid James

While Barbara Windsor appears as Theresa ‘Cheeky’ May

Wait, isn’t that Bernard Breslaw as William ‘Things are going to be hard’ Hague? 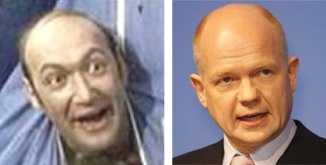 Meanwhile our on-the-scene reporter, Ivor Bigun claims to have photos of the entire cabinet immediately using the rear exit and going up the back passage of number 10. Just how long can they continue to keep it up? And when will Jeremy ‘stupid’ Hunt be forced to resign? Apparently Sgt Bung has been put in charge of the investigation.

And as for the current Tory slogan: “We’re all in this together“, the mind boggles…

What a Carry On…