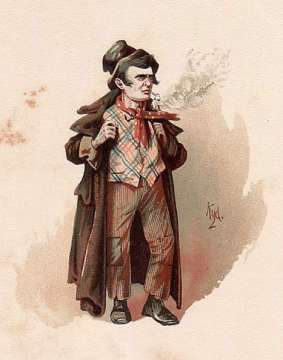 So it’s 3 cheers for Nick Glibb then!

I somehow very much doubt it, but do go on…  Wait, AA Milne and Winnie the Pooh isn’t the intended cultural literary reference for this post. Oh well, I suppose I might as well feed you the next line …

Why, what did he do?

I thought you knew? He’s just announced loadsa money to help ensure the future of our creative industries…

Yes that’s apparently correct, and I suppose we should be very grateful that in the future there will now still be a plentiful supply of talented young artists, actors, musicians and dancers able to draw audiences to fill our expensive gallery exhibitions and theatre and opera seats that only he and other well-to-do Tory Party members can afford. So that’s the Tories for you – working for everyone to be able to continue to attend performances at the Donmar Theatre, the Barbican and the Chichester Festival…

I can tell you are going to need a lot of convincing, so could you just clarify the problem?

Well, it’s just that the money the Government is providing is going to go to promoting specialist ‘out-of’ or ‘after’ school opportunities for a minority of wannabe children to become talented performers. And in most cases this means the children of informed, well-to-do families where the parents probably already have some sort of background in the Arts and they have encouraged their off-spring to paint and sing and dance from an early age. As a result many less advantaged children are being denied the chance to discover in school that they might have a hidden talent.

Ah – I suspect there’s going to be some sort of Oliver Twist to this Dickens of a story then?

Indeed yes! The twist is that when he – or at least the Df-ingE – writes in a self-congratulatory manner ‘almost half of all pupils chose to take one arts GCSE last year…’, what perhaps should have been more honestly stated was ‘it’s an absolute disgrace that less than a half of all pupils chose to take a single arts GCSE last year and that figure is projected to fall further in the future...’

The facts that Nick Glibbly artfully dodges, or perhaps just chooses to ignore, include the benefit for all children in studying Arts subjects is to learn about the important things such as creativity, design, problem-solving, team-work and independent learning that are now essential work-place skills for everyone. And as well as taking such courses for their intrinsic value, the self-confidence generated by taking Arts subjects often also helps students improve in their academic subjects as well.

But what really gives the game away as to the extent of his ignorance of the content of the curriculum is in the limitation of his reference to music complementing maths, drama complementing English and the study of art complementing history: the Arts contribute far more than that, to all subjects.

So what could Glibbly have done instead?

If Glibbly really wanted to entitle, encourage and enable children from all backgrounds to benefit from studying the Arts the best thing he could have done would have been to remove the ridiculous Progress 8 accountability measure which uses the all-far-too-important League tables to penalise schools that allow students to take non-academic GCSEs. And what’s more, it wouldn’t cost the tax-payer a penny!

At the same time he could also aim to do something about the dwindling and now somewhat derisory amount of time that all Primary and Secondary schools devote to Arts subjects up to the age of 14.

Ah, I’m beginning to see what you mean. So really it’s essentially just a bit more political spin to help make us believe that the elitist Tory Party is Working for Everyone, when clearly it’s mainly working for itself…?

Meanwhile, thanks to a colourful black and white promotional video posted on Twitter by the Df-ingE, All Change Please! has uncovered extraordinary evidence that Nick Glibb is actually living in a 1940s time-warp, and is currently being played by Will Hay… 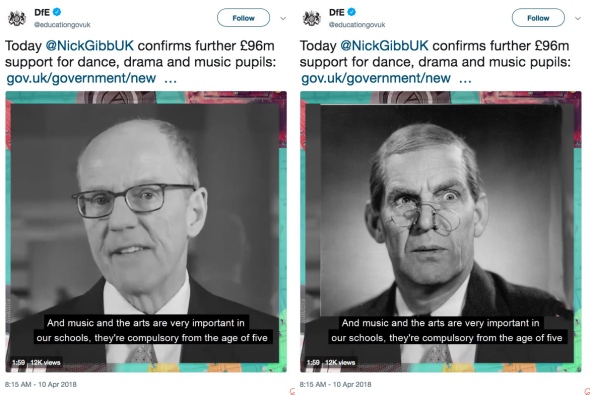 That’s Will Hay on the left, and Nick Glibb on the right. Or is it the other way round?

Do say:  That Glibbly bloke needs a good kick up the Arts

Don’t say: Thanks to that wonderful Mr Glibbly we will continue to be able to enjoy going to Glyndebourne for many years to come….

Image credits – Top: Wikimedia / Bottom: Df-ingE, and thanks to Susan Coles for spotting the likeness!