You can check out any time you like
But you can never leave!

All Change Please! has often wondered why the Russell Group of Universities is so-called? Formed in 1994, a nod to Bertrand Russell perhaps seemed more likely than a reference to Ken Russell, Russell Crowe or Russell Brand.

But the reality is that the name indirectly originates from Russell Square in central London, which, when it was created in 1804, was named after the family name of the Earl of Bedford. And then in 1898 ‘the latest of the sumptuous Hotel Palaces of Modern London‘, a large and palatial grand hotel was constructed on one side of the square, and named ‘The Hotel Russell’.

Now it so happens that in the early 1990s, All Change Please! itself used to make regular visits to the Hotel Russell. Passing by its impressive grand staircase one came to the public lounge which was well known as the favoured meeting place for publishers and academics from London University. At the same time, its position, right by Russell Square tube station and a short walk from Kings Cross, St Pancras and Euston, made it ideal for those travelling from other parts of the country. Although the refreshments were a little more expensive than those in McDonald’s (remember this was long before the advent of today’s coffee house chains), it was still much cheaper than hiring a meeting room, and the staff were happy to let you stay all day in exchange for some dainty lunchtime sandwiches or a memorable classic British afternoon tea. In winter there was a real roaring fire and for an hour or two it was possible to imagine oneself back in the elegance of the Edwardian era. That was until the management cottoned on, and eventually started asking silly prices for its refreshments that only over-rich and over-here Americans and Arabs would dream of paying.

Meanwhile, before you all rush there to check it out, be warned that it’s no longer there as it was – it has recently been completely refurbished and imaginatively renamed as The Principal London and redecorated in a post-modern mish-mash of historical styles, or ‘returned to its former glory’ as the hotel website likes to describe it.

And so it was that back in 1994 a group of 17 university academics and vice-principals from a long-lost era duly met up to enjoy a really nice cup of tea at The Russell Hotel and decided to create a super-group of universities, and, in the same way certain celebrities do, they named it after its place of conception. Perhaps surprisingly the Russell Group’s objectives were not to work together to impose an academic stranglehold the primary and secondary education system of every school in the country, but to:

But of course, like all good academics, they entirely failed to grasp and anticipate the potential practical implications of what they set out to do.

So, perhaps the time has come for the Russell Group to do what all good groups do which is to split up and then re-form and re-launch themselves under a new name. Perhaps they could once more take their name from the new owners of the refurbished Russell Hotel and call themselves ‘The Vice-Principal Group of Universities’? 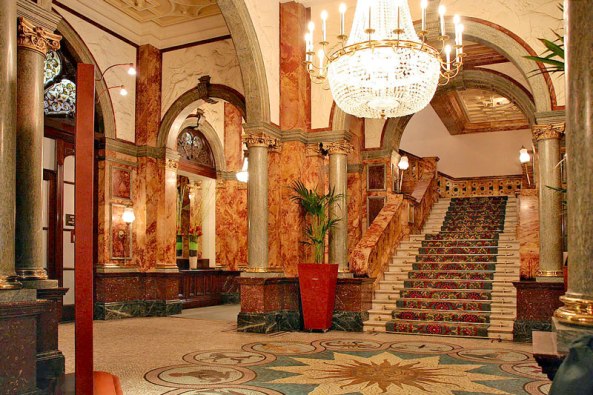 There are more photos here: https://www.tripadvisor.co.uk/LocationPhotoDirectLink-g186338-d193051-i88395875-The_Principal_London-London_England.html