First a reminder that the House of Commons Select Committee on Education Consultation on the Purpose of Education closes on the 24th January. Well it’s great that they’ve finally admitted they have had absolutely no idea what they’ve been messing with for the past 30 or so years, but All Change Please! can’t help but think that education policy in future will be justified by the statement that the government is following the direction established by the full public consultation which has proved they were doing the right thing all along and intend to continue in the same way. ‘We’ve been listening‘ they’ll say, ‘It’s just that you didn’t say what we wanted you to so we completely ignored it‘ they won’t add.

Meanwhile All Change Please!’s completely robust, accurate and reliable poll made of straw is predicting that the responses will fall into one of two camps. The first – the type that will be ignored – runs something like this:

“Everyone is good at something. The purpose of education is to help children find out what they are good at and use the confidence and self-worth they derive from this to confront their weaknesses. Education nourishes the broad natural and individual cognitive, emotional, moral and spiritual development of children and young adults in ways which ultimately gives them a sense of fulfillment and a desire to go on learning, both within work environments and in their personal lives. In doing so they will survive more easily and comfortably and pass on such nourishment to their own children and to society, thus helping ensure the successful continuation of the community, the nation, and ultimately the species.”

And the second – which is what are expected to say:

“The purpose of education is to create a pliant, well-disciplined, hard-working and employable population that doesn’t ask questions and will be led by a small highly-capable elite who will run the country specifically in order to increase their own wealth. However, in the interests of social mobility this involves giving everyone the opportunity to join the elite, whether they want to or not, providing of course they prove themselves to be sufficiently academically able and attend a Russell Group University.”

This will in turn lead to the inevitable conclusion that in order to improve the quality of education good old-fashioned traditional knowledge-based teaching is best, even more testing is needed, and the EBacc is the best thing to come along since the invention of homogenous, completely tasteless sliced-white bread.

All of which is however pretty much beside the point, because there are some much bigger, important and far more disruptive mind-bending educational issues on the horizon that are what we really should be spending our time, effort and money on if we don’t want the country to go the way of dinosaurs, horse-drawn carts and Woolworths – which is the general direction we are currently heading. And they don’t centre around obsessively arguing about whether one style of teaching is better than another, which subjects should or should not be included in the curriculum, how to make it easier to memorise unnecessary information and how many times children need to be tested on their tables.

Indeed All Change Please! isn’t called All Change Please! because it wants Just A Little Bit of Change Now and Again Please! It’s because all things need to change. What we really should be discussing is our ideas about how all schools are going to need to change and evolve rapidly evolve in the very near future, and at the same time how to ensure the quality of the almost inevitable growth on online learning and assessment that will lead the change. To get an idea of the scale of the implications for the world of education, just ask someone in the music, publishing and retail industries if the way things work now are the same as they were in the year 2000, and how much time they spend debating whether or not we should be going back to using traditional methods of selling the same products and services from the 1950s. While everyone else prepares for the Fourth Industrial Revolution – that’s the one after the IT age – education is still way back in the second one.

Thus the first Really Big Issue, which the Df-ingE seems intent on denying and publishing misleading figures about, is the consequences of the forthcoming teacher shortage, due at least in part to their highly successful ‘Let’s Blame the Teacher’ campaign they have been running (together with the recently launched parallel ‘Let’s Also Blame the Parents’ campaign). That’s because there’s an easy solution to the shortage that the Df-ingE have doubtless had in mind all along, following the worrying lead of Brazil and Australia, which is to simply plug children into ‘Sit down, switch on and shut up’ computer-based teaching systems for several hours each day. This has the extra advantage of giving the large corporate preferred suppliers massive contracts to make loads of money while spending as little as possible on the actual teaching and learning content, which will be created by programmers rather than educationalists. The companies that create these teaching systems don’t really care what the purpose of education is – beyond making them a healthy profit – let alone how to achieve it, and so just churn out an endless stream of personalised big data generated knowledge-recall multiple choice questions and test scores. This isn’t education. It’s factory farming.

And the other Really Big Issue is the ingrained belief that we still live in a world of the individual expert who knows a lot about very little, and that by the time a child leaves school and university they have been told and remembered everything there is to know. We appear to be obsessed with the ability to remember things at the expense of problem-solving and management skills. Just saying “Because we don’t know exactly what knowledge will be needed in the future we will go on teaching them the same old stuff in the same old way” and implementing the EBacc isn’t an acceptable answer. And it’s starting to look like the only way to achieve this is going to be for headteachers to unilaterally agree not to play the numbers game anymore.

Meanwhile what we do know is that our children will need to be creative and collaborative team workers and communicators, have excellent personnel management and communication skills and be able and willing to learn new knowledge and skills throughout their lives on an almost daily basis – all with no teacher there to inform and test them. More than ever before they will need to identify and maximise their particular individual capabilities and passions and be able to apply them alongside a sound, fundamental grasp of digital technologies, business, economics and psychology. And if we are to remain competitive as a nation and as a culture, these aren’t things that can be just bolted-on in the occasional off-timetable after-school club, but need to underpin the whole curriculum experience from Year 1 to Year 13 and on into further and life-long education. Make no mistake – if we don’t, then China will – or rather, already is.

It will also become increasingly important that today’s children realise that learning is not just something boring and tedious that happens under duress at school sitting at a computer answering endless multiple choice questions, but is something that is pleasurable, enriching and fulfilling and happens throughout life, and through the whole community. Importantly, as adults, they will then need to pass on the same positive values and aspirations to their own children.

The purpose of education is to prepare our children for the future. Not the past.

Jones: But I always thought the purpose of education was to learn useful things, get some qualifications and then a job serving coffee somewhere?

With thanks to Tony’s Mum and Alan. 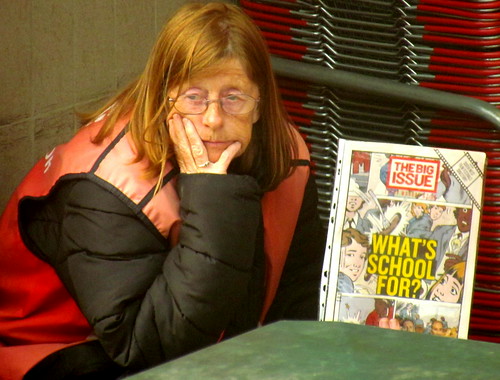 Once more, All Change Please! is privileged to eavesdrop on Mel Smith, as the man who thinks he knows everything, and Griff Rhys Jones, as the man who knows he knows nothing, as they discuss the latest developments in education.

As the scene opens, Mel Smith is reading his newspaper – the Evening Standard – and speaks in a posh voice:

Smith: “Ah have you seen, there’s a new Stoppard opening at the National, I must book”.

Smith:“It’s a new play by Tom Stoppard – you know he did ‘Jumpers’ and ‘Rosencrantz and Guildenstern are Dead’.”

Smith: Well there you go then, that proves Nick Glibly’s point, you haven’t had a proper education unless you can appreciate the sort of plays they put on at the National Theatre.

Jones: Oh, the National Theatre, I thought you meant the Grand National and there was a horse called Stoppard who was a good jumper, and there were two other horses they’d had to put down.

Smith: No No No! What old Nick Glibly said the other day was that studying English at GCSE was crucial to enable people to enjoy the theatre as adults.

“I think it’s hard to really appreciate a play at the Donmar [Warehouse] or the National Theatre if you haven’t studied English to GCSE…Studying English literature to the age of 16 helps you to understand a demanding play by David Mamet”.

And he also said that schools must teach pupils the “fundamental principles” of core subjects in a way that will enable them to read around the subject for leisure as adults.

“The purpose of school is to provide that grounding to indulge and read around those subjects as you go through adult life.”

Jones: But I always thought the purpose of education was to learn useful things, get some qualifications and then a job serving coffee somewhere?

Smith: Well, not according to him. Apparently the core EBacc subjects are ‘the primary colours of an educated person’s palette’, which makes it a bit strange that they’re not including Art as one of the subjects.

Jones: He doesn’t know what he’s talking about does he?

Smith (losing the posh voice): No, you’re absolutely right, he’s obviously got no idea at all. In fact he’s stark, raving bonkers. The whole education policy is a complete farce, and he’s just an understudy behaving like a prima donna, trying to upstage Nicky Morgove to put himself into the limelight by making a scene. I wonder who prompted him to do it?

Jones: He’s really not thought this through, has he? I mean let’s face it, if everyone in the country wanted to go to see plays at the National or this Doner Kebab Warehouse place, they’d get booked up so far in advance it would be donkey’s years before anyone could possibly get a ticket. And anyway, as Drama isn’t included in the EBacc there won’t be any actors around to play the parts will there?

Smith: Still you can’t blame him for jockeying for position, even if he has fallen at every hurdle.

Jones: No I suppose not. Anyway, can’t hang round here chatting all day.

Smith: Where are you off to then?

Jones: I’ve got a ticket to see Warhorse run in the 19:45 at the National…

What, do you mean you’ve never been to the Donmar Warehouse in Covent Garden? Or never seen a play by David Mamet?