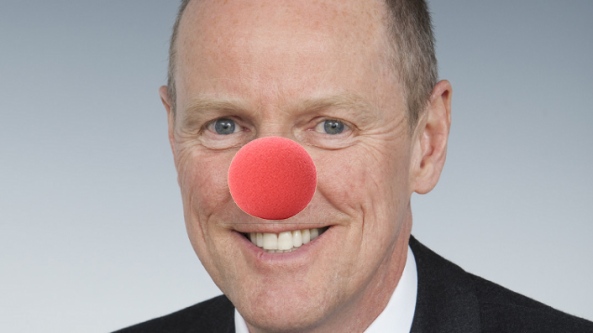 Following recent reports in the TES, Nick Glibbly appears to be preparing for a new role as a stand-up comedian for Comic Relief.

“Ladies and Gentlemen, please give a warm round of applause for a former politician and newcomer to the Comedy Club – I give you Knickers Glibbly “

Polite applause, and a titter or two at Glibbly’s Red Nose

“I say, I say, I say… Did you hear the one about PISA? Yes missus, that’s the Programme for International Student Assessment. I don’t believe it – they are trying to politically influence the international rankings! Of course, here in England we would never dream of letting politics determine our educational policies, would we?!”

Mild laughter as the audience absorb the irony

A funny thing happened on my way here this evening. As usual I was licking the boots of Andreas Schleicher – the head of the The Organisation for Economic Co-operation and Development (OECD) that runs the PISA tests, and whom Michael Gove once described as ‘the most important man in English education‘ – wrong again Michael, you know that’s really me, don’t you? – when all of a sudden he tells me about his latest plans for the tests.

Now in the past, the PISA tests were just about regurgitating facts and figures. Therefore in order to improve our world rankings we changed the entire curriculum to ensure our children would receive teacher and knowledge-led instruction and thus achieve better marks and climb higher up the league table, because after all that’s what educational achievement is all about, isn’t it? Boom! Boom!

But now it seems PISA are introducing a more progressive approach to education, called ‘the 21st-century incompetence-based curriculum’, and so they are introducing new tests in things like creativity and collaborative problem-solving, which of course we’ve been completely ignoring in our schools! And so, ladies and gentleman, here comes the punch-line – yes that’s right – we’ll be back down the bottom of the league table again! What a joke!”

Laughing out loud and occasional whooping – or is it weeping?

“Of course, because I don’t understand anything about these 21st century incompetencies, what I’ve not realised is that the OECD doesn’t either and their tests are extremely limited and ineffective, so it’s really not going to make much difference at all!”

“What’s really strange though is that when I challenge the the OECD about it, it seems I’m the only one who disagrees, so obviously that means I must be right!” Am I bovvered? In future that stupid boy Andreas Schleicher can lick his own boots!

Hysterical laughter brings the house down.

“My name’s Nick Glibbly. And I’m the Most Important Man in Education! Thanks for learning, and it’s Good Night from me!”

This Christmas Nick Glibbly is appearing in Pantomime at the Df-ingE, where he will play the comedy role of Michael Gove. He has also been nominated for a Derrière Comedy Award at next year’s Edinburgh Festival in the ‘Least Likely Politician To Succeed In A New Career As A Comedian’ category.

You couldn’t make it up, could you?