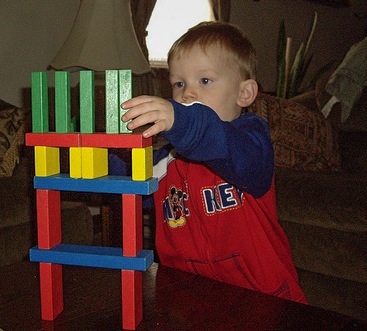 A new initiative by traditional academics insists that very small children should first be taught a rigorous programme of structural theory and have a good knowledge of the scientific application of forces before being allowed to play with building blocks.

OK, this time just kidding, but admit it, for a moment there you were willing to believe it!

Meanwhile All Change Please! recently read an account of a prospective employee, who when asked a knowledge-based question in an interview, admitted he didn’t know the answer, but that when it became important to the work he could suggest various ways in which they would be able to find out. The employer was impressed, both with his honesty and resourcefulness, and he got the job.

In contrast, reading much of Gove and Truss’s spin or the writings of traditional academics, one could easily believe that an abundant store of known knowledge is an essential and the only prerequisite for any future employment, and at the same time not a single child has been taught a single piece of knowledge since the 1960s. This is of course, all complete nonsense. The reality is that the majority of children in the majority of lessons have continued to be formally taught existing knowledge. Indeed there is current trend in the production of resources intended to support teachers who have never used a project-based learning approach before.

And if All Change Please! reads just once more the supposed myth-busting  revelation triumphantly proclaimed by traditional academics that ‘you can’t look everything up on the internet’ it will scream. Let it make something clear. NO ONE IS SUGGESTING THAT CHILDREN SHOULD NEVER BE TAUGHT ANY KNOWLEDGE.

All so-called ‘progressive’ teachers of any worth recognise the value and importance of knowledge. What they do however is to question the type and amount of knowledge needed and to try and relate it as much as possible to practical application rather than abstract theory. They are also keen to develop children’s abilities to independently discover and learn – and question the reliability and validity of – new knowledge.

What’s really missing in the education system though is a structured programme of the development of thinking and learning skills, properly coordiated, monitored and rewarded across the whole school, instead of the current very patchy, haphazard exposure children might or might not encounter, depending on which teachers they just happen to have that year. When that finally happens then perhaps we will really be able for the first time to assess how effective or not it is.

OK, quiz question for budding traditional academics. Who is supposed to have said “A little knowledge is a dangerous thing. So is a lot.”? No cheating now…

In case you were away from school the day that was covered, the answer is Albert Einstein. All Change Please! is happy to admit it didn’t previously know that. Indeed it was only after searching online to discover the source of the earlier saying “A little learning is a dangerous thing” that it discovered Einstein’s version. Sounds like a little searching might be a good thing.

Of course, a little knowledge can, as it is said, be a dangerous thing (as Gove has demonstrated through his lack of knowledge of teaching and learning). but so is too much. As well as more specialists we need more generalists who are able to see and work with the bigger picture. And as All Change Please! might just have mentioned once or twice before, what we’re currently completely failing to do is engage in any sort of debate about exactly how much formal ‘just in case’ knowledge of a given subject is now appropriate, and what that knowledge can best be delivered’ as it now can be, ‘just in time’.

Instead of nervously looking over our shoulder at the future while grasping to keep hold of an ever receding past, we should be striding positively towards tomorrow, learning from the mistakes of yesterday. Or as someone else once sang:

Shinin’ at the end of ev’ry day

And tomorrow’s just a dream away.

Now I wonder who wrote that? Well, this time it certainly wasn’t Einstein. But there’s a clue in All Change Please!‘s last post.